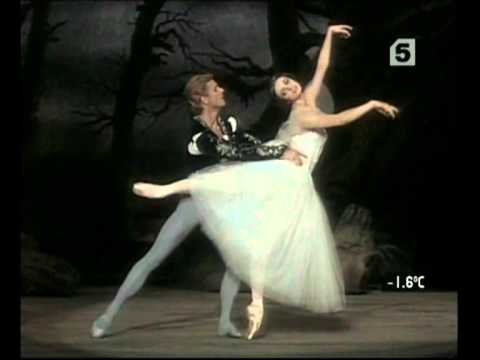 When I was about 13, I was smack in the middle of one of the hardest times of my life. Aside from the usual things that go along with that awkward, turbulent age, I was constantly bullied, I was scared to go to school, and I just generally didn’t fit in the small, conservative Texas town where I was raised.

Ballet was my life at that time, (making me even more of an odd duck), and it became my lifeline in a very real way then and for years to come. I danced five days a week, leaving no time for any other commitments, including the things all the other kids were doing, like football games and parties. (Not that I had any friends to go to those things with.)

Somewhere in that time I became obsessed with the movie Dancers, and more specifically, the ballet Giselle that the movie centered around. I must’ve checked out that VHS a hundred times from my local Blockbuster. I would watch the pas de deux between Alessandra Ferri and Mikhail Baryshnikov over and over and over again. At school when my insides hurt from loneliness and pain and feeling so horribly different, I would play the music in my head, recreating the movements under the desk with my feet, doodling the lilies from Act II in the margins of my notebook.

Tonight I was lucky enough to catch a broadcast of the Bolshoi Ballet’s production of Giselle at my local movie theater. I went by myself, choosing a seat away from everyone else so I could fully immerse myself in the music and dance. And all at once, 25 years later, years since I’d even thought of the ballet, it all came back to me: the music, the choreography, the story onscreen…my story. I sobbed through the entire second act. It was so beautiful it was almost physically painful to watch.

It’s amazing, isn’t it? How art can leave such firm imprints on our souls and how long they last. How a single note or step can bring it all back in an instant. How much someone can change our lives without even knowing it.

After the Bolshoi broadcast, I found out that a dancer who would become my future teacher, mentor, and friend joined American Ballet Theatre soon after the company filmed Dancers. Rocker performed in Giselle alongside Alessandra Ferri, and the ballet, being his first with the company, holds a special place in his heart as well. Imagine what my little junior high heart would’ve felt if it had known all of that as I marveled at what unfolded before me on the screen.  Coincidentally, (or not!), Rocker reignited my love for dance years after I’d given it up, cast me in A Chorus Line, and became my teacher, mentor, and friend.

The ripple effect is an amazing thing.

It's amazing, isn't it? How art can leave such firm imprints on our souls and how long they last. How a single note or step can bring it all back in an instant. How much someone can change our lives without even knowing it. Click To Tweet

SIGNIFICANTLY. Cartoon by Caitlin Cass for The Ne

Move it along, Lisa.

Have you ever had those years that pushed you to y

This should end well.